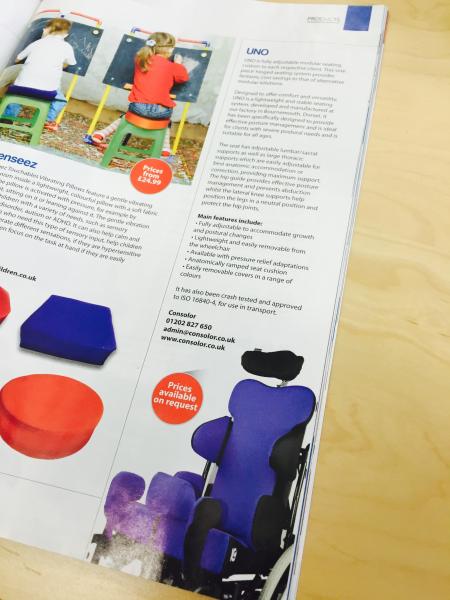 It’s been an exciting month for Consolor as both our staff and products have featured in two of the leading magazines in the industry.

UNO, our modular seating system landed a spot on the ‘Hot Stuff’ section of Pos’ability – a disability lifestyle magazine. The regular feature highlights the most innovative and helpful products on the market.

Featuring on page 45 in the April/May issue, copies are available now on subscription and will also be available for free at upcoming exhibitions, including Naidex.

It’s a great time to be shouting about UNO as we are currently performing nationwide demos for both UNO and Pengy so if you are an OT or therapist and would like to find out more about our latest products over some lunch and refreshments, contact us using the details below.

We were also featured in Thiis., a trade magazine that provides a resource for manufacturers, suppliers, retailers and professionals working in the homecare, disability, assistive technology and rehabilitation sector.

This time it was our use of social media that was highlighted as one of our recent tweets was featured in their ‘best industry tweets’. It’s a new feature, which ‘looks at some of the most creative tweets from the marketplace’.

The tweet in question was published in aid of Comic Relief and featured Andrea, Sasha and Chelsea from Consolor wearing their red noses. The tweet read: “If you call the office today we might sound a bit funny!”

We are delighted to have been recognised for our use of social media, in particular our ‘humorous tweet’, which some of you may remember from Red Nose Day.

We think actively posting on Twitter, and also other platforms such as Facebook and LinkedIn as really important as it gives our clients and colleagues an insight into the company as well as being a great source of keeping in contact and hearing everyone’s feedbacks on our service and product.

Connect with us on Social media:

© 2022 Consolor | Specialists in Seating and Mobility for Disabled People.