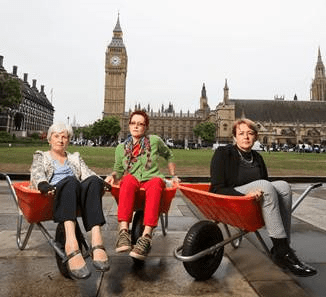 Right Wheelchair, Right Now: Have you pledged yet?

Lead by Baroness Tanni Gray-Thompson and the Wheelchair Leadership Alliance, the campaign has been catapulted into the media and Consolor is proud to support them.

You may have seen it on the news: three wheelchair users sitting in a wheelbarrow in Parliament Square to demonstrate to the world what having the wrong chair feels like.

The photo brought to life just how difficult it can be if the right wheelchair is not prescribed. She said: “If I don’t have the right chair, I might as well be in a wheelbarrow.” We couldn’t agree more.

Within the first seven days of launch, the campaign received the following coverage:

With over 550 new Twitter followers within the first seven days, including Gordon Ramsay and Al Murray, they have now received just over 1,600 pledges, with it increasing every day.

We’re so pleased that this campaign is evidently receiving the support it deserves. We will continue to support the campaign in any way that we can.

Let us know what you think of the campaign over on our Twitter, we’d love to hear your thoughts! Tweet us @ConsolorLimited .

To find out more about the campaign visit their website: http://www.rightwheelchair.org.uk

You can pledge your support here: http://goo.gl/WN2Qmg

© 2021 Consolor | Specialists in Seating and Mobility for Disabled People.